We get our first look at the third RED series figure in these new product photos.

In Demand Toys via their Facebook page posted the already-seen stock images for Transformers RED Optimus and Megatron. But along with them was three photos of Soundwave which had not previously been shown with the first reveal of the line. Transformers RED features non-transforming figures based closely on the appearance of the characters in the original G1 cartoon. Or at least that’s the theory. In Soundwave’s case, the deco has been based on an unofficial, fan-colored model sheet, resulting in an incorrect color layout on the legs. This Soundwave is not the first to fall victim to this misunderstanding. Soundwave is shown here to include an accessory cassette-mode Laserbeak that fits in the figure’s chest. It’s also notable that unlike Optimus and Megatron, Soundwave clearly sports double-jointed elbows, which seems specifically to facilitate the ability to press the eject button molded near the left shoulder. 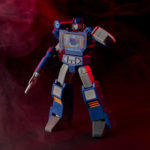 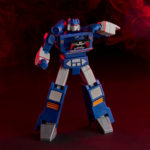 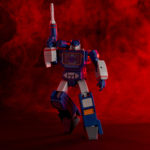 Transformers RED is apparently to be a Walmart exclusive line in the US. As of the time of writing, Walmart’s website has product pages up for four RED series figures: Optimus Prime, Megatron, Soundwave, and Bumblebee. This may represent the complete first assortment of Transformers RED, covering most of the typical “core G1” character selections. Along with these, we know of a Cheetor figure and a Transformers Prime Arcee that will be part of the line, giving some hope that the choices will quickly start branching out to other parts of the franchise as subsequent waves come along. None of the figures are in stock for order or preorder right now, but it’s anticipated that they may go live sometime today, June 26th. According to Jtprime17 who shared the product page links, the Walmart app shows a planned release date of August 4th for at least Optimus and Megatron.