Okay, that rules out Ratchet for a Transformers Tuesday. And in fact, it presents us with a total of five more exclusive sets that we didn’t know would be a thing before today!

Amazon launched preorders in the US for the first War For Cybertron Galactic Odyssey set, featuring the rumored two pack of Earthrise Ratchet, and Lifeline. We’d been hearing some conflicting reports regarding the Earthrise retool of Ratchet, including that it would be a Selects release, but many of the most recent statements had pointed to come kind of two pack with a Paradron Medic deco Arcee, and that part at least has come true.

Neither Ratchet nor Lifeline seem to present any unexpected surprises. Ratchet has a new robot head, and an added lightbar on the van roof topper, but otherwise shows little or no sign of evident mold changes. Lifeline looks like it’s going to be a direct redeco of Arcee with no mold changes at all. 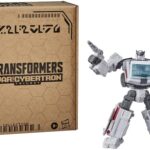 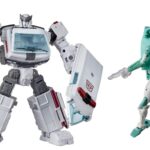 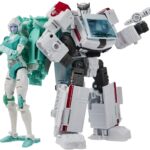 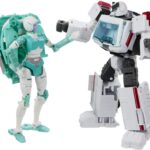 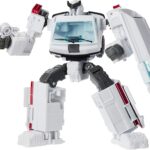 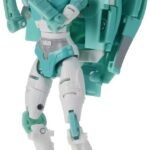 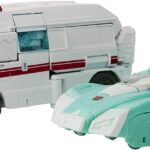 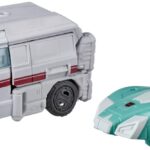 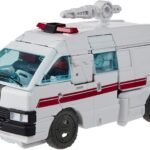 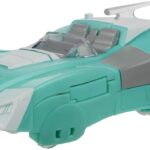 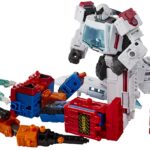 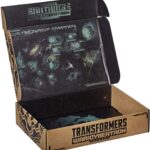 This set falls outside of Generations Selects and the regular Earthrise numbering, being part of a new Galactic Odyssey Collection. This series of apparent exclusives serves the purpose of chronicling the journey of the Ark after it leaves Cybertron. The product copy for this two pack, for instance, describes Ratchet visiting Paradron in search of energon, where he meets Lifeline. Whether even this much will be documented with the toys themselves is unknown, and questionable at best; much long form print material like that has been abandoned in the last couple of years in favor of making the products as internationally marketable as possible with the fewest print variations they can get away with.

It looks like there will be five Odyssey sets in all, including this one. The inside flap of the product packaging has a space map based on what collectors have been assembling bit by bit with individual retail toys so far, with five locations prominently displayed: Paradron, Biosfera, Botropolis, Dominus, and Micron. We can assume there will be loosely themed sets of figures based on each world. Biosfera, for instance, likely to include at least one beast form toy.

Amazon has the set for preorder now, with an expected release on December 1st. As of post time, the set was only available to order within the US, and how or when it might become available to international customers was unknown.

With Ratchet’s status now confirmed, this does guarantee that the final two Selects reveals for Transformers Tuesdays are something that we don’t know about yet, or at worst, they would be something we have some loose knowledge of but that has not yet been associated with Generations Selects. Not to mentioned we have four upcoming sets like this one with contents we also don’t know. Excitement and surprises! Let’s enjoy this feeling while it lasts!