Eric John A Cruz posted on the Facebook Group Cybertron Philippines showing an interesting find: a very Generations Selects-style box for a toy observing the tenth anniversary of Transformers: Prime. The toy in question? War Breakdown. 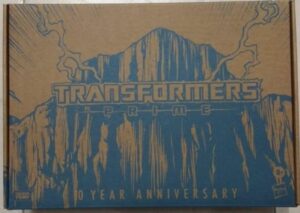 Now, there’s no images of any sort of what’s inside the box, and it’s not clear of Cruz has the item in his possession or merely obtained the packaging images, so we don’t know much at all about this right now. The label on the end of the box does tell us the toy is Deluxe class, which sadly rules out a rerelease of the Arms Micron series Voyager-and-a-bit class Breakdown designed by TakaraTomy. But we do have some of the product numbering, including a barcode number. It didn’t register any results in the retailer systems we were able to check, but that’s not terribly surprising if this is a Selects-style release like it appears to be.

It is interesting that this is being called War Breakdown, and described as a Vehicon. War Breakdown is specifically TakaraTomy’s name for the toys of the character they released, including in Unite Warriors which went with “Zombie War Breakdown”. And the character was never a Vehicon within the show’s context. Whether this is indicative of anything to do with the toy itself, or is simply the product of some brand unity and a bit of poor research remains unclear.

It’s possible that this might be just a solo release of the Unite Warriors figure, since that has a completed deco and the original boxset release was a number of years ago already – and we can probably safely assume Combiner Wars molds still work in the current toy budget models. But there is the possibility of this being a retool of something else. Perhaps the most immediate conclusion to jump to in that case might be another redeco of Siege Hound with a new head sculpt. There’s an adequate enough resemblance in vehicle modes, if nothing else.

We’ll probably know more about this before long. In the meantime, fans of Prime are probably already compiling wishlists to fill out the rest of this presumed subline. Though I think everyone would probably agree that it would be great if we could finally get a really nice toy of Knockout, even if it was just a retool of some other car.