We can safely say that nobody was expecting this one. The final Transformers Tuesday reveal almost miraculously went unspoiled and unleaked, giving us a genuine surprise for the conclusion of this five week reveal event. The last of this batch of Generations Selects is a two pack of Ratchet and Optimus Prime in Shattered Glass deco, which did not seem to be on anyone’s speculation radar. 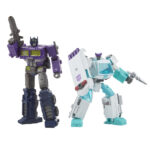 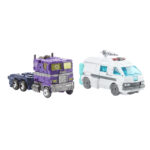 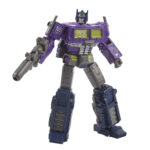 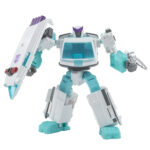 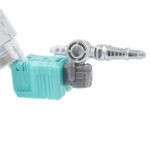 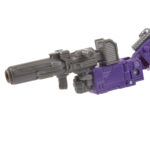 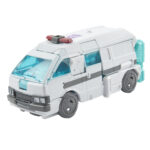 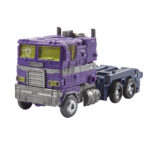 Both toys use their Earthrise molds, giving us another instance of the Earthrise Optimus Prime cab robot without its trailer following the Voyager-And-Frends-class release of it in the upcoming Netflix WFC wave. There had been speculation that the solo use of the Earthrise robot for the Netflix line might have been possible because the trailer was diverted for use with the upcoming Nemesis Prime using the Siege robot. The use of just the Earthrise robot here might serve to indicate that the trailer need not necessarily be produced along with the main figure. Either that or there’s another toy to be released around the same time that will just happen to feature another use of the Earthrise trailer.

Shattered Glass was introduced by Fun Publications back in 2008, as a mirrored counterpart universe where Autobots were evil and Decepticons heroic. Though the Hasbro Pulse product page for this set seems to be crediting IDW with the creation of Shattered Glass, which is at best an… incomplete history.

This isn’t the first time a Shattered Glass item has been produced independent of Botcon. Hasbro Asia produced a redeco of MP-10 Masterpiece Optimus based on the Shattered Glass version of the character, and Flame Toys released a version of one of their Furai Models in this deco as well. The deco particularly for Shattered Glass Optimus proved to be pretty popular following its original use for Botcon 2008.

This set has an expected release date between December and February, depending which fan-channel retailer you opt to preorder through, and is listed at $49.99.

Transformers Tuesday has now come to a close, but it seems that taking its place will be probably monthly reveals for the Galactic Odyssey collection, of which there are still four unrevealed sets. Plus PulseCon is at the end of this month, which will probably carry plenty of reveals – and preorders – as well.