A leaked Japanese preorder solicitation image this morning gave us the first look at Transformers Kingdom’s Commander Class toy: Rodimus Prime! This low res image is incomplete, as it notably fails to depict the trailer battlestation that’s been reported by the inside-info crowd as being part of the toy like the G1 version. But it does have an obscure extra accessory taken from the pages of IDW’s ReGeneration One comic series: The Sword of Primus. 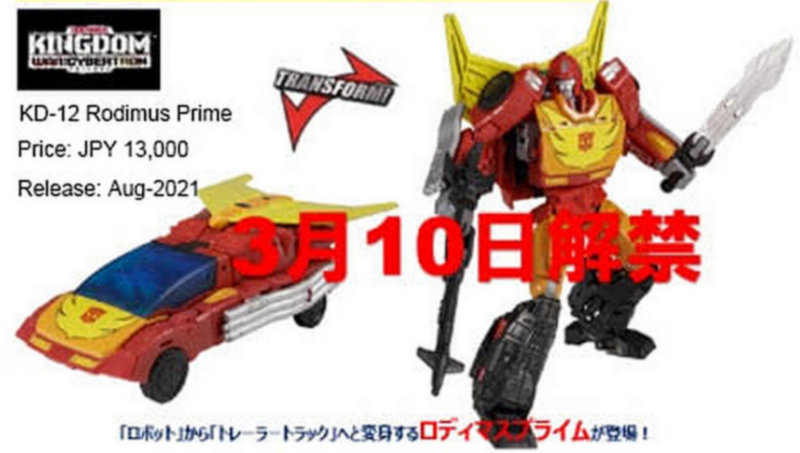 Rodimus is a new, unique mold, though it looks like some broad strokes of engineering might be copied from Studio Series Hot Rod. The robot forms a full vehicle on its own without the trailer unit, as seen occasionally in the G1 cartoon. It’s also been said that the Rodimus robot is about the height of Earthrise Optimus Prime, giving a good sense of the mass of this toy. How well the trailer and any other accessories might fill out the rest of the $80 price point remains to be seen.

But it might not remain so for long. There’s indications that a proper reveal for this is coming very soon, and it’s not a huge leap to believe it might be just part of a bigger product debut event, which would take up for the absent Toy Fair presentation this year. That might be in the form of a Transformers Tuesday event as early as next week! Hopefully Hasbro will begin advertising that for us shortly if so!