Last week, we were invited to join a roundtable interview with Ran Sun and Lenny Panzica from the Transformers team, along with representatives from several other sites. Over the course of about half an hour, we had the chance to pose questions related to the Hasbro Pulse Fan Fest reveals, and talk and give direct feedback about the brand.

With big thanks to our buddy Anthony at TFU.info, we’re able to bring you audio clips from the conference call, highlighting some interesting segments of the interview. There are also text format versions of these questions and answers below for easier reference, though in this case both the questions and answers will be paraphrased to some degree for clarity without losing the original meaning of the answer.

We also had a couple of points come up that won’t be included with the audio clips, but are worth documenting:

Ran could not give any specific details on this, but did say that this is something that they also have on their minds and they’re continuing to look for new ways to keep the value for the subscribers.

In commenting on the current packaging styles, I specifically noted how impressed we were by the Shattered Glass subline’s box design.

In answering this, Lenny seemed to indirectly confirm that the Shattered Glass lineup would be online-only. He compared the Shattered Glass packages to other “e-commerce” packaging designs, which would seem to refer to things like Amazon’s windowless-box exclusives. This does not say whether Shattered Glass will be specific solely to Pulse in the US, but it doesn’t sound like it’s headed for store shelves in any case. 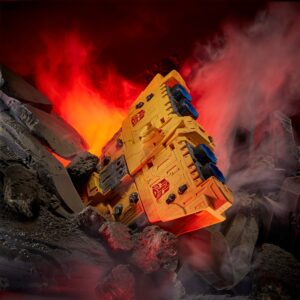 Anthony (Roarbots): How did it feel to develop the first new Titan ever since G1?

Lenny: Necessary. As kids growing up, and now as fans as adults, it’s one of the things in the Transformers world, where you expect everything to transform. We thought one thing we could bring to the universe which never really happened was, the Ark never transformed. The Ark isn’t as big as the other Titans, but comes with more stuff, like Teletraan with three modes, and accessories and a lot of deco work. 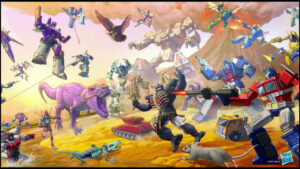 Anthony (TFU.info): Will designs from the Kingdom promo poster that haven’t made it out as toys during Kingdom be considered for use in future lines? And along that line, is the Weaponizer and Fossilizer play pattern here to stay, or is it done after Kingdom?

Lenny: For the play pattern, it depends on the story we’re telling and how the pattern fits, so if it makes sense to include, we will! 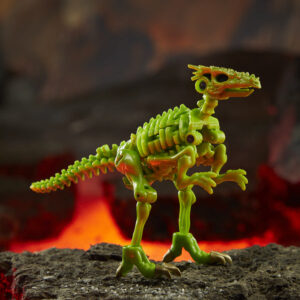 Anthony (TFU.info): One question I did have – Dracodon, what went behind the choice of green for that figure?

Lenny: Mark and I were riffing on what we could do to update [Vertebreak]. …you see, the whole [photography] set is like a lava field, right? We were like, you know how in deep Russia there’s these acid pits by the volcanic fields? What if he was fossilized and scanned a …what is it… a Stygimoloch skeleton in one of those pits? And it came out and is literally like acid bones? Which is metal… it’s a heavy metal acid bone thing. Rad. 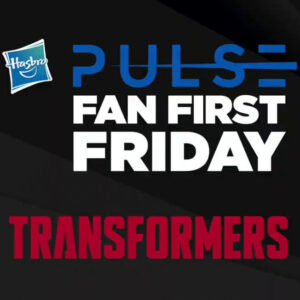 Phil (ASMZine): Pulse Fan fest, the Toy Fair presentation live stream, you’ve made a great effort to bring convention events for people when we can’t really get to them in person right now. For the future where we can have in person conventions again, do you see the online events like Fan fest still continuing to reach out to the fans that don’t have the opportunity to attend shows in person?

Ran: There’s definitely talks for the future of keeping something like that to keep things inclusive for all fans. There’s nothing we can say definitely for the future right now, but there’s talks right now for how to mix in person and virtual events like this. 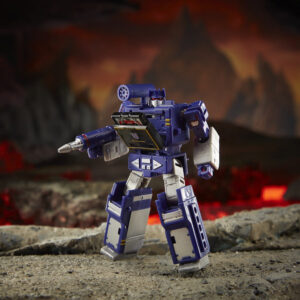 Ben (BWTF.com): Is Core Class going to only be in-store only going forward? Asking to get clairification, but also out of concern for lack of in store stock nowadays.

Ran: We didn’t intend to have anything under $10 put on preorder. That doesn’t mean it’ll never be online, we just didn’t put it for preorder, so we could focus on our higher price items. We’ve had feedback in the past that sometimes we’ve had way too many reveals, so we thought that focusing on the higher price point items, with the preorders people can plan ahead with it a little bit and make sure they can get their hands on those items. The Core scale … our plan is to put them not just in store but also online, but just did not put it as part of a preorder.