You are here: Home / All Podcasts / Radio Free Cybertron - All of our Transformers podcasts! / RFC News Desk 141 – Leaks, Buzz, BotBots, And Jam

There was a lot of activity over the weekend, mostly involving retail system datamining that has pulled some interesting info for us.

Mr.Chaos from TFW has shared information on the first wave of next product-year’s Studio Series figures. We hope you like either the 86 movie, or the Bumblebee Movie…!

LivingRangerKey, and UncagedOtaku came up with some Target system finds.

Anticipated Kingdom Tracks retool Road Rage is confirmed to be a Target exclusive, much lime Runabout during Earthrise. Right now it seems the product listing doesn’t tie Road Rage to Target’s Red Card, which will probably be some small relief, but only until you realize that it’s still a Target exclusive and that experience is rarely fun no matter what.

Buzzworthy Bumblebee is somehow still a thing that’s happening. Power Charge Bumblebee is being rereleased from the Bumblebee Movie line in Buzzworthy packaging, and a Generations Deluxe Origin Bumblebee is listed, but we don’t have any solid indication of what that name might actually mean. Could Hasbro be further retooling the Earthrise Cliffjumper body to resemble Bumblebee’s G1 Cybertronian form?

There’s also some mystery listings. An Optimus Prime and Megatron at $49.99 each, but without a line name attached. And a new assortment price point at $39.99 that also doesn’t seem to be connected to anything specific. 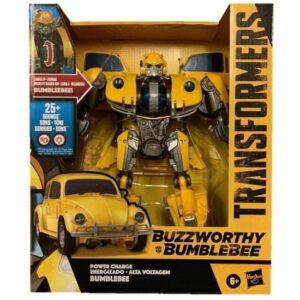 Jtprime found some official art for a new BotBots series, the Ruckus Rally. On the art you can see BotBot vehicles made from a slice of pizza, and a game controller. We don’t know anything else about this series currently, including when or where it might show up. But it looks like BotBots is continuing to survive, and we’re very glad to see it!

Finally, another Collaborative figure has been uncovered: Project Jam. Nobody has stepped up to give any real hints about what this might be. Common conjecture is a Space Jam crossover, which isn’t a huge leap. One supposed insider has been reported second hand as attributing this to a Blaster in collaboration with a band that wasn’t specifically identified.

With the Jam listing having a price equal to X-Spanse, that points to a leader-size figure. If the band thing is true, Titans Return Blaster sounds like a possible jumping off point, if its base mode were repurposed as a stage, and figures added to represent the band in question. But none of this should be taken as anything more than speculative.