Transformers Tuesday is back, and the official social media channels have managed to get out ahead of the fell-off-a-truck sources in giving us the first look at two of the early Core Class figures coming in Legacy. First is the redeco of Kingdom Core Class Starscream as Skywarp, proving the inevitability of death, taxes, and seeker recolors. But in a shocking, or at least annoying move, Skywarp lacks the iconic seeker arm cannons that were present with Starscream. Instead, Skywarp comes with something that’s been described both as a tuning fork, and a slingshot in initial fan reactions. Either way, it seems an unpopular choice. 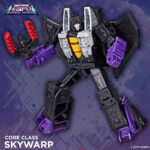 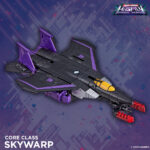 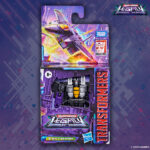 Skywarp ships alongside Iguanus, based on the G1 Pretender. This takes the Pretender shell design as a robot mode, and gives it a motorcycle alternate mode based on that vehicle form of the inner robot. This basically follows suit with how prior Pretender updates have gone across various lines over the years, and the result is a pretty good blend of aspects of the original toy. Iguanus comes with a weapon not entirely unlike Skywarp’s whatever-it-is, right down to a variety of pegs and ports at various angles, which might suggest some style of combining weapon play pattern across the Core Class, or perhaps a more broadly intended interaction with the accessories from the larger price point toys. 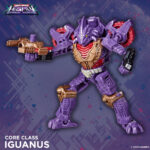 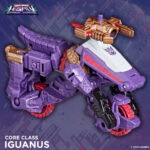 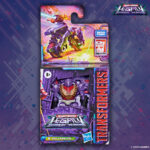 Core Class Hot Rod also has seemingly extraneous connection points, and despite ultimately being released in Kingdom packaging, it was designed as a Legacy toy. This probably means as well that the G2 redeco of Core Class Megatron will see a newly designed accessory added in place of the Megatron-shaped pistol of the Kingdom release.