On the Earthrise side of TakaraTomy’s December preorders, there was the Sunstreaker which we covered a little earlier, as well as the first half of the Battlecharger pair, Runamuck! This is in fact our first look at a production-colors sample of this mold; Hasbro’s publicity images to date have been renders, and any samples on hand at Toy Fair would have been early enough to have been fully hand-painted.

In these photos, Runamuck looks to have been cast in a very nice, bright white – though photos can be tricky in that regard, so we’ll still hold this with guarded optimism pending more photo sources. These photos give an important opportunity to study the build of the figure and be able to say with a great deal of certainty that Runamuck, and by extension Runabout later on, are not part of the Wheeljack/Sunstreaker mold family. Despite having some parts of the car modes end up in similar places, the processes of getting there and all the structural elements are distinctly different. 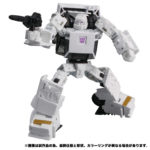 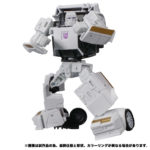 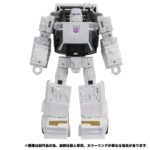 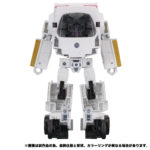 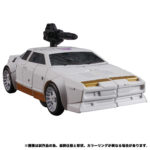 Runamuck, like a little over half of the Earthrise line in Japan so far, is a TakaraTomy Mall exclusive, with the ID code ER EX-14. Along with Sunstreaker, Runamuck is due to be released in late December for about ¥3,000. ETA in Hasbro-served markets is currently around November, but as things like Doubledealer, Sky Lynx, and Scorponok are all already in the US distribution system, and in Doubledealer’s case already shipping from at least one retailer almost two months ahead of the original schedule, Hasbro’s Runamuck will probably precede the Takara release by a more significant margin.