I hope Ractonite wasn’t the Australian reveal coming next week… By way of some leaked in-package stock photos, we have first looks at two toys from the second wave of Kingdom’s Deluxe assortment.

One is a repack of Arcee, which is otherwise unchanged from the current Earthrise release. Due to packaging method changes between the lines, Arcee is now packed in such a way that much of the robot’s considerable backpack is concealed. This would seem to be more coincidence than intent, as structuring the packaging this way is about the only way to stabilize the robot without it being tilted forward in the packaging. While for those among the fan community less than thrilled with the design of this Arcee may find it bizarre to see rereleased, it’s worth remembering that the second pass during Kingdom will get it back on shelves during the run of Studio Series 86, which surely is on purpose.

This leak brings us our first look at Ractonite, the second Deluxe Fossilizer in Kingdom. Ractonite is a styracosaurus skeleton, and while we naturally can’t see very much of the toy from these shots of a packaged sample, at least the card art looks pretty cool.

This is, sadly, probably just the start of the leak cycle for Kingdom wave 2, even though it’s been barely any time yet since Kingdom’s official reveal, and not even all that long since we began seeing leaked wave 1 toys. It’s almost worth getting a betting pool going on if we’ll end up seeing leaks of all of Kingdom before 2020 is even over with! 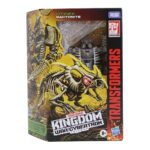 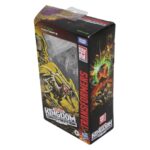 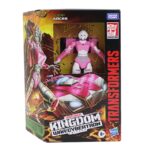 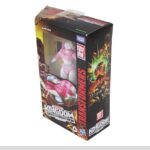