You are here: Home / All Podcasts / Radio Free Cybertron - All of our Transformers podcasts! / RFC News Desk 145 – All About Bees

It’s been a very Buzzworthy Bumblebee weekend. Three new Studio Series vs packs were identified, some of which already having in-store sightings. The new set feature unchanged repacks of previous molds, and include Clunker Bumblebee vs Barricade, High Octane Bumblebee vs Stinger, and VW Bumblebee vs Muscle Car Dropkick. The sets look like they’ll be about $43 as they turn up at Targets and probably online before too long. 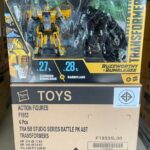 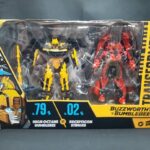 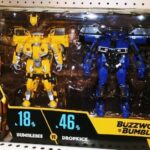 The Worlds Collide four pack has turned up in stores already, with sightings in at least Texas and New Jersey on Monday. The set may be shipping two per case, with some stores getting at least two cases worth at a time. The retail on this four pack is $84.99.

Finally in Buzzworthy news, Origin Bumblebee, the all-new Deluxe Bumblebee based on the hovercar vehicle form seen in the first episode of the G1 cartoon was found in the Dallas area late last week. One oddity with this release is the absence of a plastic window on the box, instead simply having an open front.

Stock photos were discovered for Cyberverse Deluxe Cheetor, a figure that’s been rumored and referenced in inventory datamining for quite a long while now. The figure will ship in Dinobots Unite styled packaging, and features armor pieces instead of standard blast effects. Expected release timeframe is currently unknown. 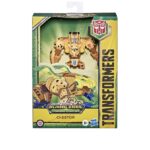 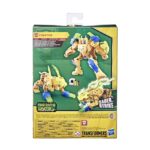 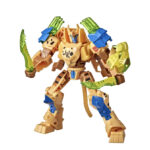 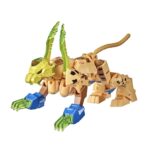 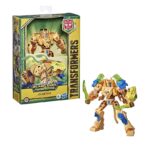 And rounding things out, Commander Class Rodimus Prime and the Titan The Ark have hit US retail, with in store sightings at a few Targets, as well as online availability from walmart.com in the case of the Ark. Online inventory went fast this past Friday, but some of the orders have already been fulfilled and delivered over the weekend.