Solicitation stock photos appear to be going out for the long-rumored Generations Selects Galvatron, with at least one retail outlet having a preorder up with one image each of robot and cannon modes. In keeping with the inside info that’s been leaking all over the place for mmonths, this Galvatron is based on the look of the original G1 toy, in a mainly grey deco with purple arms and thighs. Selects Galvatron also features a lot of detail resembling the original toy’s stickers – at least some of which look like foil stickers in these photos, which will surely be to the dismay of many with bad memories of Power of The Primes and the later half of Titans Return. 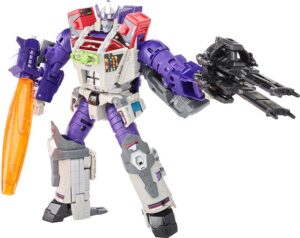 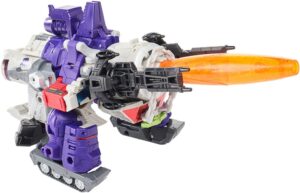 There’s no evident remolding or swapped out parts on this version of Galvatron, defying the hopes of some that a headsculpt based on the original toy would be substituted. This Galvatron is giving small nods to Galvatron II, from the Marvel comics, who appeared in a deco strongly resembling the original toy. The clearest is the accessory Matrix being colored all in green, consistent with the comic’s Creation Matrix – though in fiction that was associated more closely with Thunderwing, rather than Galvatron.

Preorders are not yet available through the regular channels as of this writing – maybe this is a Transformers Tuesday debut and we’ll see it on Pulse and fan channel tomorrow? But the one listing available right now carries a ship date of September. If that holds up, this isn’t too far down the road at all. Now, let’s just hope the shoulders were assembled the right way from the start on this variant…