This week for Transformers Tuesday, we got the official reveal and preorders for Generations Selects Cyclonus. This Cyclonus is an unusual mix of ideas, a tiny bit of which was not even clear until Mark Maher followed up with some design insights on his instagram account.

This Cyclonus was known in advance to be a deco based on the G1 toy, complementing the previous Selects Galvatron, as well as the Studio Series Sweep whose colors were inspired by the original Scourge toy. We had also known somewhat in advance that this was to be a Targetmaster edition, coming with a redecoed Battlemaster as Nightstick. And it was thought that, unofficially at least, it was intended to be able to be a Cyclonus’s Armada for any so inclined. That’s a lot of angles! But the details are even a little more interesting than that.

When the reveal happened, one of the first things that was noticed was some blue interspersed with the expected rich purple. While there were some expressions of distaste at this addition, it has cause to be present. The initial batch of G1 Cyclonus in fact featured blue detailing in the same places, and it was chosen to reference this comparatively rare variant of the original toy. It’s an unexpected direction for this to go, and helps it to feel a little less like a simple color-swapped Cyclonus. The G1 Targetmaster Cyclonus release never came in this deco variation though, so it does possibly lose a bit on overall accuracy with these choices.

An included optional sticker sheet helps complete the toy appearance, though much like Galvatron the toy has a complete deco all by itself. Because the proportions of this Cyclonus differ greatly from the G1 toy, a few of the sticker designs have had to be tweaked quite a bit. This is notably evident in the shin stickers …which may be better left off anyway. The sample shown in the stock photos depicts stickers placed on the lower legs. But there’s also landing gear the folds out from the lower legs, and the openings in the stickers that should be meant to accommodate those moving panels are very clearly narrower than the panels themselves. This might just be an error with the current sticker sample which will be fixed in time for the full production. If not, user-end trimming should be an easy solution for anyone desiring to use those specific stickers. 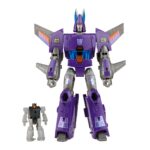 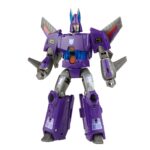 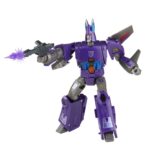 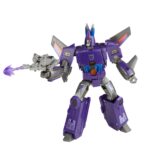 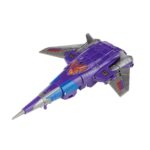 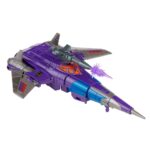 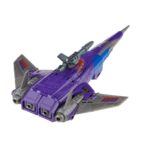 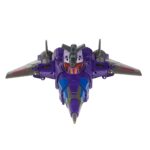 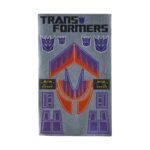 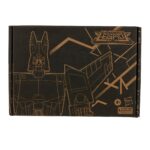 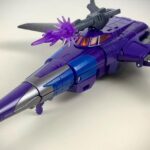 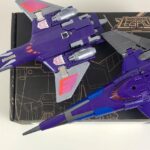 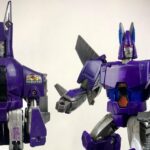 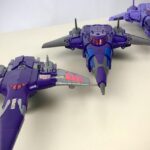 But on the subject of the stickers, it looks like Mark and the gang on the Transformers team might be readers of Maz’s TF Square One. Maz himself was quick to notice in the stock photos that the cockpit canopy stickers had an orientation based on his own research of prototype versions of the G1 Cyclonus toy, an application of the stickers rarely known or talked about outside of his work on the subject. It’s a very interesting nod that may in some way “canonize” what Maz had suspected was the original design intent with G1 Cyclonus that got lost to persistently repeated instruction and depiction error ever since.

Mark made an instagram post following up the reveal, talking about designing the deco for this release of Cyclonus. Besides acknowledging the choice to use the rarer early toy colors over the more commonly expected versions, he also dropped the tidbit that using already-released Battlemasters and the Nightstick that comes with this toy, it’s possible to build a G1-accurate colors Nightstick. The Nightstick included is close, but should have black arms and grey legs instead of the arms and legs all being grey. That’s not something that can be feasibly achieved in manufacturing, as the arms and legs share a sprue.

Selects Cyclonus went up for preorder at Pulse and other retailers that carry Selects for just under $40, with an expected release date around the beginning of August. There’s literally no telling when it might actually show up though. For instance, Legacy Blitzwing which was solicited with an official on shelf date in October has been found at a US Target already. The current absence of illicitly obtained samples floating around at this point do tend to lend weight to this not coming along for a while yet, though.