This past Monday, the reveals started for this year’s Amazon exclusive Generations subline. The theme for this third collaboration is the Wreckers, giving us the Wreck N’ Rule Collection. As usual, basic knowledge of a Wrecker-themed exclusive batch was presented to the fan community months in advance, though some of the execution has not happened quite like we anticipated.

On Monday, the two pack of Impactor and Spindle was revealed. Impactor is a retool of Siege Impactor, made to be as accurate as possible to the Marvel UK comics. As such it features a new chest piece and newly designed head, and the shoulder cannon has been modified as well, though to a more subtle degree than the other changes. Spindle is a retool of Fossilizer Paleotrex as a spinosaurus, replacing a few key elements of the original mold to get a passable new dino out of the underlying structure. She’s portrayed in the product copy as a new recruit to the Wreckers, which probably means a very short life expectancy. 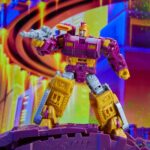 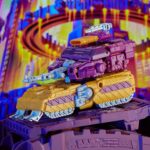 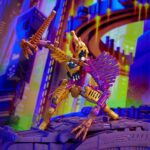 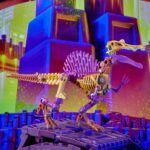 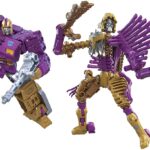 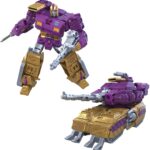 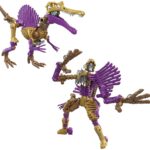 On Tuesday, a second two pack was shown. This consists of G2 Leadfoot, and Masterdominus. Leadfoot is a minor retool of Kingdom Mirage, featuring a new head. But most importantly it has a brilliant G2 deco applied to it, including some very shiny metallic blue paint that looks quite good – at least in the promo shots. What Leadfoot lacks, however, is the giant propellor unit of the original toy that placed it within the Rotorforce subgroup, thus denying this Leadfoot the chance to be a Transformin’ Rotor. Tragic.

Masterdominus is a retool of Ractonite as a mastodon. The new name is obviously meant to evoke “mastodon”, but it took literally no time at all for fans to make other connotations with the syllables. For its part though, Masterdominus seems to be a remarkable effort at remodeling a dinosaur skeleton to be something quite different. One imagines this was exactly how it was for the earliest days of paleontology as well. 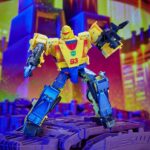 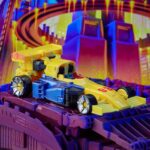 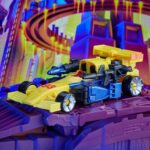 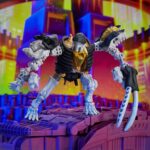 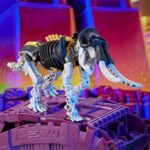 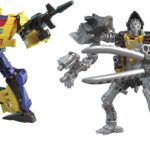 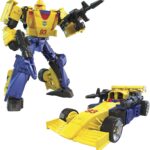 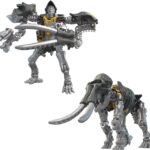 As it was with the Golden Disk Collection, we’re promised reveals every day this week. And the packaging is once again designed to all stack up awkwardly to reveal a combined boxart. The other feature for this set of toys is a Wrecker hammer that can be fashioned from pieces included with each set. This is not quite what it sounds like though. Instead of a build-an-accessory for the toys to use, we’re told that this is instead going to be a cardboard hammer, at “life size” which can be used for collector display. Honestly, I think most of us would have preferred some little extra bits of plastic.