Poor Dirge got lost in the news cycle.

A sample of Earthrise Dirge was shown late last week by tfjianggqi on Weibo. Unfortunately, it had the misfortune of hitting as part of a bigger wave of reveals and other related news and so slipped through the cracks a bit. Also apparently having slipped through the cracks is Dirge’s left arm, which had gone missing somewhere before getting in the hands of the photographer here. Dirge shows the same basic mold changes observed in our leaked first look at Thrust a few weeks ago. Notably, the main wings are mounted to the legs here, though using attachment points still found on Thrust. Other retooling specific to the conehead iteration of the Earthrise seeker mold is also present. 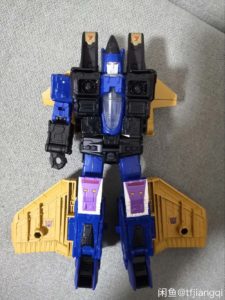 While we’re still waiting to see a whole copy with all of its limbs and bits, not to mention a look at the vehicle mode, it still gives us evidence that two out of three of the conehead Seekers are on the way and in production even now. Only Ramjet remains unaccounted for in any way, aside from a guest spot on Sky Lynx’s boxart. However, we know better than to believe that the whole team won’t be coming out in due course.