But it’s not quite scratching that itch…

It’s the second week of Transformers Tuesdays, and right on schedule (or maybe a minute or so early) we had the newest official Generations Selects debut: WFC-GS16 Bug Bite.

Bug Bite was among the datamined names discovered early this year, though the actual toy may not be what any of us were expecting. Bug Bite, who was originally a GoBot and then adapted in to Transformers about 15 years ago in the form of a white redeco of reissue G1 Bumblebee. Botcon 2007 went a bit further and actually named their evil white Bumblebee redeco Bug Bite. But based on these things it had been expected that Selects Bug Bite would be a redeco of the Bumblebee retooling of Earthrise Cliffjumper. Generations Selects Bug Bite is instead a white version of the Cliffjumper body, swapping in the Bumblebee head, but going otherwise unmodified. 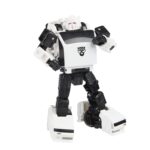 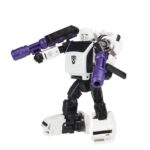 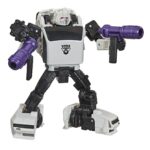 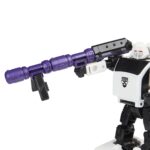 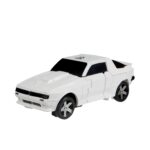 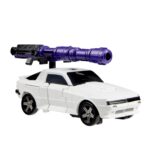 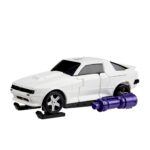 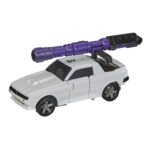 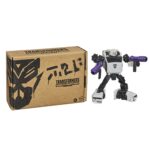 As to why this is the case, there’s a variety of possibilities to consider. The Bumblebee parts available for this mold are realistically styled, and clearly require licensing with Volkswagen. Just at a start, Hasbro may have wanted to avoid the added costs of licensing another VW alt-mode toy. It’s also conceivable that Volkswagen may not permit villain characters to use their likenesses and branding. It’s even possible that Walmart is somehow to blame, if they were able to claim some amount of exclusivity with that physical iteration of the toy design when they took on Bumblebee as an exclusive, colors regardless.

But one other possibility exists, which has been known to make things tricky in the past. Hasbro acquired Tonka, who was the original owner of GoBots. This happened in the early 90s which is why G2 had a subset of toys called Go-Bots, and there was a character named Gobots. This gave Hasbro access to some aspects of GoBots, including character names and concepts. But likenesses are more complicated, since the original GoBots toys were licensed Bandai Machine Robo toys. Each time a GoBot character has been referenced in a Transformer toy, a fine line has been walked. Takara declined to name any of the toys in their GoBot-decoed mini-vehicles set after the characters they were inspired by. Around 2007, a redeco of Classics Mirage was made in the image of the GoBot Crasher. But the name was changed to Fracture, and the deco artist also had to find a real-life formula car that resembled the intended character deco. All of this to protect against any risk of action from making products too similar to another company’s property.

In this case, making the toy named Bug Bite a Volkswagen might be a similar situation of pushing it just a little too far. After all, Botcon 2007 Bug Bite wasn’t a Volkswagen either, because neither was the Bumblebee it was made from. Ultimately we’ll probably never really know the specific reason for the choice of mold elements used here, but clearly there’s a lot of potential reasons why this may have been necessary.

Bug Bite is currently up for preorder at Hasbro Pulse and the usual assortment of fan-oriented retailers, with arrival dates projected anywhere from October to December, depending on where you order.