You are here: Home / RFC News Desk / Earthrise Runabout Listing Found In Target’s System – Rumored To be Another Exclusive

And also maybe Thrust, too.

We have an image from Target’s inventory data system showing the presence of Earthrise Runabout, confirming the second Battlecharger will be following along after wave 3’s Runamuck. The toy’s existence isn’t exactly a surprise, but so far we hadn’t been sure just how it would get released, with retail assortment, Generations Selects, and exclusive format all being viable possibilities. Runabout is listed as WFC-E41, which is now our highest-known serial code value in Earthrise. The previous highest number was E39, which is supposed to be the Battlemaster Doublecrosser. 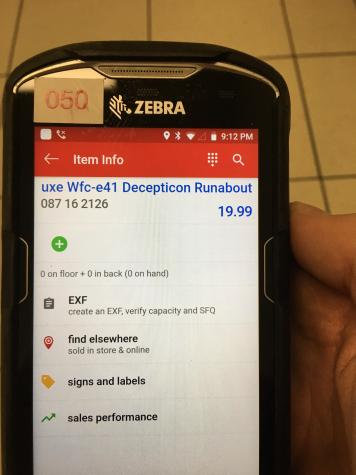 A Target employee followed up after the original release of this image, indicating their belief that Runabout would be exclusive to Target later this year. They went on to add that Thrust appeared to be under the same status as well. We are treating this as a rumor for now, since verification of the information is not yet possible, but it seems sadly plausible. Everyone who has – and still may be struggling to get hands on the Thundercracker and Skywarp set, or any of Target’s recent exclusive offerings will probably not be very pleased by this development.

It’s interesting too. If Doublecrosser is E39, and Battlemasters are the start of numbering for a product wave (which they consistently have since the WFC-numbering system began), then having Runabout as an exclusive take a code two digits removed raises a few questions. It’s possible that if Earthrise has been truncated, as some speculation goes, a tail-end Battlemaster like Doublecrosser could just get ported forward to the first wave of Kingdom instead. After all, if a mold exists, it has to get released somehow. But this is definitely something we’ll be watching for more developments on.

More Cyberverse Boxsets Heading ...
The Transformers TCG Comes To An...