It’s also not Walmart exclusive anymore. Fan channel retailers like Pulse and BigBadToyStore began posting product listings this afternoon for the second Leader Class Spoiler Pack from the Netflix War For Cybertron line. The subline itself has been a Walmart exclusive for the US, but it appears that at the very least this toy in particular no longer is.

While Pulse is trying to maintain the mystery, no one else is following suit right now, so we know from a number of retail sources that the “spoiler” figure is “Battle Worn Nemesis Prime”. This is the Siege Voyager Optimus Prime in Nemesis deco, with the trailer from Earthrise Optimus, and some of the accessories made for Power of The Primes Nemesis Prime, including the giant arm cannons and the non-transforming sword. Also included is a red redeco of Slitherfang, and three more energon cubes probably embedded in Compound in the package. 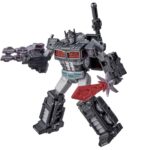 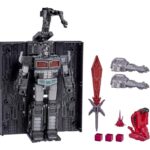 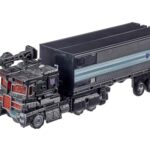 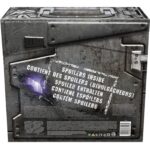 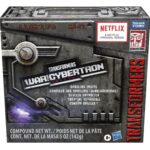 This Nemesis Prime, though using the same toy as TakaraTomy’s exclusive Nemesis Prime, is significantly different in deco. Much of the teal has been dropped in favor of more red, and this might be a more dark grey rather than black like the Takara effort. It might be good enough for many who missed out on the Japanese Nemesis Prime, but those hoping for a second chance at a toy that’s hard to get at a reasonable price will probably be disappointed.

This suddenly becoming available from other retailers is curious, but possibly not inexplicable. The spoiler pack from the first wave of Netflix WFC at Walmart by most indications didn’t go very well for Walmart, with many locations ultimately marking it down to $35 or less within only a month or so of it reaching shelves. In some cases, packages were broken open in stores, likely by confused customers that wanted to know what they were theoretically spending $60 on.

It might have been too late in the process for any learning taken from this to course correct the second wave, but Walmart may have looked at the result and opted to reduce the number of units they were willing to take on in order to avoid taking another bath on an expensive toy in badly thought out gimmick packaging when they’d have to again clearance it in a matter of weeks. If so, Hasbro may have been left with a surplus of inventory in need of a home. Ultra Magnus packs also made their way to fan retailers after Walmart’s clearance effort, which might have been the result of a partial buy-back by Hasbro.

Whatever the case, assuming there is a third wave of Netflix inspired War For Cybertron Trilogy redecos, it’s a good bet that if it’s at all possible we won’t see them try “spoiler” packaging again.