Good news for those who missed the Amazon Power of the Primes exclusive!

Citing Facebook user Chan Fuk Cheung, whose page does not have these images immediately evident as of this writing, TFormers has posted images of the upcoming Netflix Siege Wave 2 Spoiler Pack, comparing Hasbro’s Nemesis Prime to the TakaraTomy equivalent and revealing another accessory. 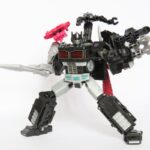 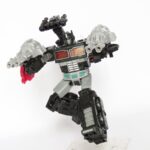 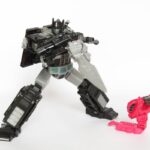 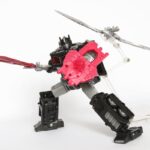 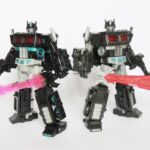 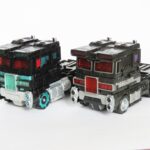 Nemesis Prime also comes with Giza, the Bird-to-Sword Mini-Con previously available with the Amazon exclusive Power of the Primes Leader-class Nemesis Prime. In fact, the inclusion of Giza completely recreates Amazon Nemesis Prime’s bonus arsenal, which is great news for those who missed the exclusive and balk at its current secondary market prices. Also, this means that for the SRP $59.99 of the spoiler pack you get the Siege Voyager Optimus Prime mold with its Eyebrow Truck alt mode, plus the Earthrise Leader-class trailer and a set of Armada-inspired accessories: wrist blasters (which were oversized on the PotP Leader and are comically oversized here), the Dark Saber, and Giza. All this plus a red recolor of Slitherfang – who we affectionately refer to as “HISS Plank” – and some plastic energon cubes embedded in delicious, delicious Play-Doh. (DISCLAIMER: You should probably not eat the Play-Doh.) That’s a fair value for the price in our opinion!

The comparison shows typical deco choices for a Hasbro Nemesis Prime: a charcoal gray as opposed to TakaraTomy’s jet black, less teal, and more red. The figure is a Walmart exclusive in North America; Walmart’s website offers a ship date of October 15th, though we (diecast in particular) have found Walmart ship dates to be of somewhat variable accuracy.