This week on Transformers Tuesday, we have the reveal of another Amazon Exclusive Battle Across Time two pack. The Autobot and maximal pair this time is Sideswipe, retooled from the Siege engineering for an Earthly vehicle mode, and Skywarp, Maximal eagle from Beast Wars II, a redeco and head-swap from Kingdom Airazor.

Skywarp (whose Hasbro equivalent was a Silverbolt – or possibly the original Autobot Silverbolt) was one of a long list of legacy name reuses seen in Beast Wars II, with no real regard for the original characters they referenced, hence the Cybertron, or Maximal Skywarp in the Takara release of Magnaboss. There is no indication at this time of further updates to the Magnaboss trio, and this looks like a one-off nod to the extended family of Beast Wars series as part of the observance of the 25th anniversary with a mold that probably had limited reuse options to begin with.

Sideswipe is reworked a little more, with the body shell parts now strongly resembling Earthrise Sunstreaker, calling back to the two originally sharing the same basic Lamborghini model as a starting point. This includes things like reshaping the hood, making it (and consequently the robot chest) more square. But as a downside, those who’ve already invested in aftermarket spoiler addons will probably be out of luck, as other body modifications seem to remove the spaces where those parts were designed to attach. But, Sideswipe follows the example of the last few uses of the Siege mold and includes both the shoulder cannon and rifle accessories.

The two pack went live on Hasbro Pulse and Amazon early this afternoon. It sold out quickly from Pulse’s limited allocation at $47.99. Amazon was a few minutes behind Pulse, but launched at $44.99. Following Pulse selling out, Amazon has raised the price, and at time of writing the set now sits at $52.99. You can preorder from Amazon (affiliate link), and if the price slides back down to Hasbro’s suggested retail price of $44.99 before the set is released in November, you’ll get the lower price.

We’ve got stock photos (and a few useful stills from the turntable video they sent) and product copy for the set which you can see a little further down.

A little after this set was announced, BigBadToyStore sent out an update advising that a restock was coming for the Siege Refraktor Reconnaissance Team set, the three pack with G1 toy-colors deco and extra parts, as well as a restock of the Earthrise Allicon. It seems as though new production runs for these toys may be in the works as has happened for a select few others in the past several months. These are also expected around November. Hopefully this will be part of an ongoing pattern of getting toys that had limited distribution or otherwise were hard to come by a second chance – or even a third! 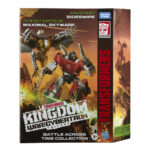 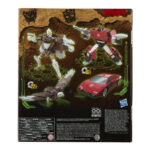 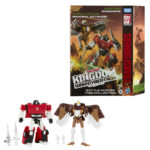 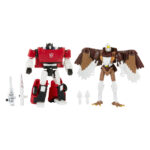 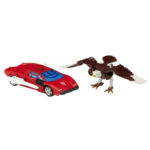 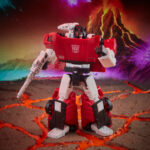 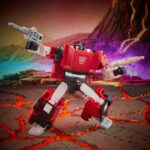 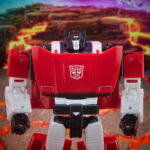 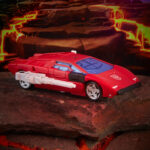 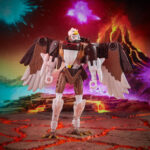 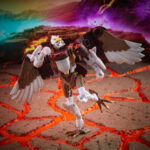 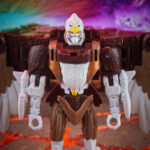 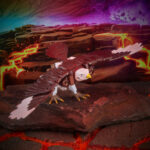 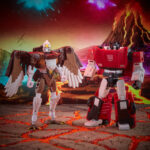 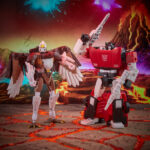 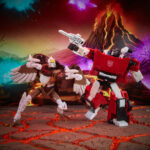 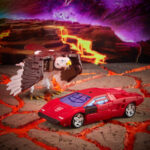 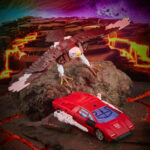 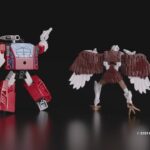 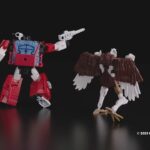 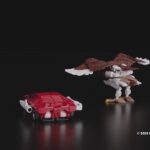 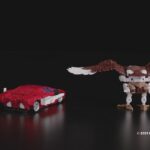 The Deluxe WFC-K42 SIDESWIPE and MAXIMAL SKYWARP Battle Across Time Collection includes a G1-inspired SIDESWIPE figure standing at 5.5 inches tall that converts from robot to sports car mode in 16 steps and a Beast Wars II-inspired MAXIMAL SKYWARP standing at 5.5 inches tall converts from robot to bald eagle mode in 22 steps. The figures come with a shoulder cannon, blaster and 2 Photon blaster accessories.

The Battle Across Time Collection allows fans to experience the clash between G1 and Beast Wars with MAXIMAL and AUTOBOT team-ups! With SCORPONOK in pursuit, SIDESWIPE and SKYWARP must team up to keep the DECEPTICON-PREDACON threat at bay. Each Battle Across Time pack features exclusive art that creates an epic battle scene when combined (each sold separately, subject to availability).

Beastify the battlefield! Worlds collide when the MAXIMALS and PREDACONS join the fight, coming together with the AUTOBOTS and DECEPTICONS in an epic battle that will alter their destiny forever. Adult fans nostalgic for the original TRANSFORMERS animation and kids discovering classic characters for the first time can share and experience exciting play patterns for all generations. Available now for pre-order on Amazon.