It’s a week until SDCC, which means it’s time for everything to start leaking before official word hits. We’ve considered this a grey area in the past, but as has been the way recently, we’re getting an unexpected first look at a yet-to-be-announced toy from In Demand Toys.

Flamewar is the last figure to be identified from this second series of Shattered Glass toys, following on from Slicer, and preceding the official reveal of Shattered Glass Soundwave, who we’ve known about (but not yet seen) from prior leaks. Flamewar is a redeco of Legacy Transformers Prime Arcee based on a Botcon exclusive from several years ago. Flamewar will come packed with a redeco of the Battlemaster Pteraxadon, this time called Fireglide. The intent seems to be to represent the bow weapon Flamewar had in previous iterations. 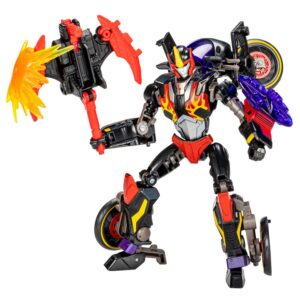 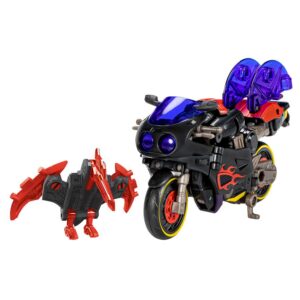 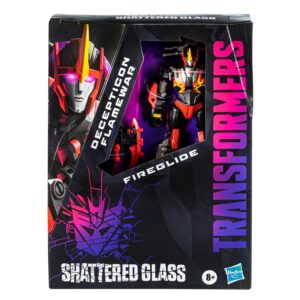 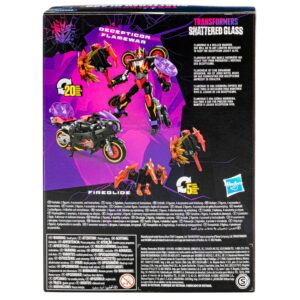 Flamewar calls this whole Shattered Glass angle in to question though. Slicer was borderline as those colors could represent Shattered Glass Wheeljack, even though the toy is shown wearing the wrong insignia for that purpose. Likewise, the previously revealed Ultra Magnus is designed to serve dual purpose as the evil alternate universe’s Ultra Magnus, but also represent Delta Magnus, the Transformer-named Diaclone Powered Convoy. Flamewar meanwhile has no existing role in any Shattered Glass fiction, making this the most tenuous inclusion yet for the purposes of this subline.

We should expect to hear the official announcement of this figure soon, probably with SDCC next week. In the meantime we don’t have a clear idea of the release timetable projected for it, but at this point it’ll probably be estimated as after the end of the year. Stay tuned!