The first Transformers cancelled-convention exclusive of 2020.

This morning via comicbook.com, we had a first look reveal at an exclusive box set for the War for Cybertron line. The Quintesson Pit of Judgement recreates the courtroom scene on Quintessa from Transformers The Movie in a really attractive multi-pack.

Included are a minorly redecoed Quintesson Judge, a redecoed Legends class Sharkticon, and a Quintesson Bailiff, redecoed and retooled from the upcoming Allicon. In addition, small, non-transforming figurines of the Quintesson Prosecutor and condemned Kranix are included. The insert tray is styled like the Sharkticon pit, making for an amazing looking display unit.

Kranix is roughly the size of a Battlemaster or Micromaster, having been scaled to fit in the prison cell of the Quintesson Judge’s alternate mode. It also makes Kranix just about perfect size to be fed to the Sharkticon, which the stock photos don’t shy away from demonstrating. 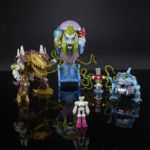 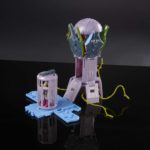 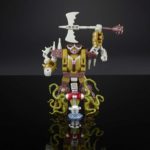 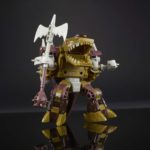 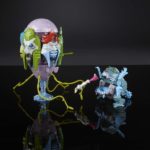 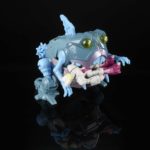 This is scheduled to be shown off again as part of tomorrow’s Fan First Friday stream, and is supposed to be available exclusively on Pulse in September.

The Pulse exclusivity, September timeframe, and initial reveal on comicbook.com all come together to point very clearly to this having originally been meant to be an SDCC exclusive. The leftover exclusives from at-show sales are posted online between mid-August and September, always only on Pulse, and they’re promoted by pop culture websites that typically have next to nothing to do with Transformers. While there’s a chance this was not ever going to SDCC, it’s a very small one.

We’ve been waiting for any sign of orphaned SDCC exclusives since the event was cancelled earlier this year. We’d previously speculated that Alternate Universe Optimus Prime might have also been designed for SDCC, and that may still be true. But whatever the originally intended disposition of that toy was, this set is much less ambiguous.