From realistic jet to cartoon robot and back!

Loopaza Mega Store on Facebook has shared scans from the Transformers pages of the most recent Figure King Magazine, which is notable for us thanks to a nice spread showing a primer-grey testshot of the newly designed Masterpiece Starscream. This is our first real look at the new figure’s jet mode and a few of its design features. 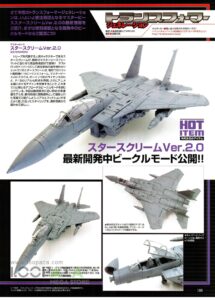 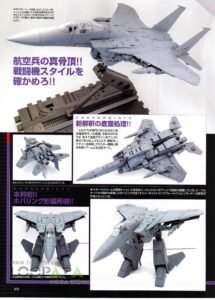 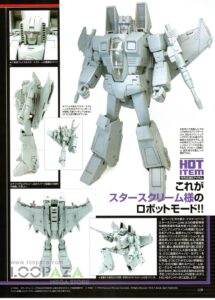 The jet seems to be going for more realism versus the devotedly cartoon-inspired robot mode. There’s a degree of detail in the cockpit, plus a radar unit in the nosecone which you can reveal. The top of the jet is generally highly detailed, though of course the underside betrays the robot attempting to hide within. One particular offender is a big squared off chunk that very much seems to be a coverup for a fake-parts cockpit canopy for the robot mode. Meanwhile, we still can’t quite figure out what those extra hinges in the wings are actually hinging, though it may be part of a means to swap the detailed jet mode wing surfaces with less-detailed ones for robot mode.

Much of the rest of the Transformers pages promote TakaraTomy’s releases of US retailer exclusives, like Amazon’s Alternate Universe Optimus, the Coneheads set, and the Ironhide and Prowl two pack, plus a few of the next wave Netflix figures that’ll be going to Walmart. All of these will be handled by TakaraTomy Mall for the Japanese market. 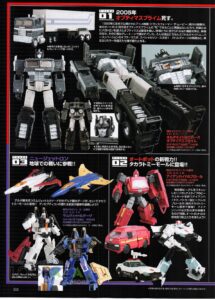 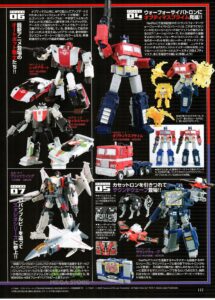 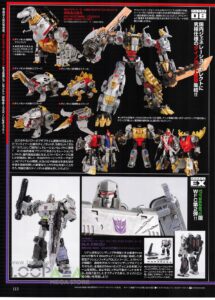 But, we are treated to a very nice feature on Gigawatt, preorders for which appear to have begun in Japan as of October 1st, JST. We have little shortage of official photos for this toy, though it seems like it may have undergone some slight tweaks, such as increasing the tint of the clear plastic windshield to help obscure the robot parts on the other side. It’s still uncertain when preorders will be available for Gigawatt domestically – that is, apart from the less-than-2000 special edition packaging ones that got instantly scalped off of Walmart’s website a couple months ago. 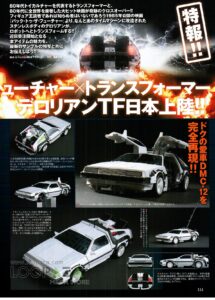 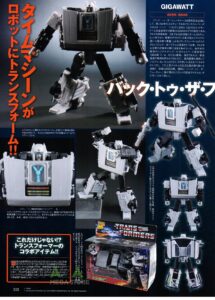