For Transformers Tuesday this week, we had the first look reveal at the Red Cog Weapons Pack coming exclusively to Targets in the US at some undisclosed point this year.

Red Cog has been on the rumor sheets for quite a while, and was assumed to be based on the recolor of Cog that came with the original Grand Maximus. As it turns out, Red Cog is taken from the appearance of one of the many background-filler Cogs from the Netflix Siege cartoon. Whether that Cog was itself loosely based on Grand Cog, we’ll probably never know, but it seems a little unlikely.

So besides being a redeco of Cog, this is an accessory pack release like the Centurion and Tricranius packs previously. This one specifically leans in to the Netflix angle by offering up accessories and weapons mostly drawing from what was seen in the Netflix shows. The parts are designed to be somewhat modular, so you can make some weapons specifically seen in the cartoon, but also develop your own combinations. 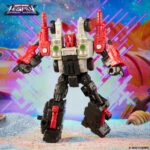 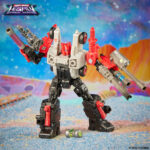 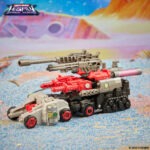 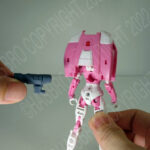 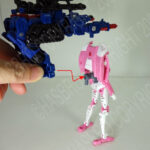 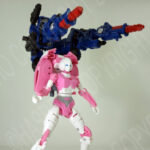 Among what we’ve seen and can identify in particular are a pistol that was used as a medical tool in one scene, an energon container, a triple-barrel shotgun, a rifle with barrel extension that Elita-1 was seen using, another pistol which can do double duty as an adapter to let Arcee wear a Cog as a cannon backpack, and a grenade which is depicted having an alternate use as …armor? The grenade is interesting, since it’s not from the Netflix show, but is instead borrowed from Transformers Prime where it was part of the arsenal belonging to that show’s iteration of Wheeljack.

While the release timeframe is not known, we do have a pricepoint thanks to some datamining in the inventory database: $31.99. That’s seemed to be a little bit tough for some to swallow given Cog’s original SRP of $19.99. But reluctantly acknowledging $24.99 as Deluxe SRP now, an added $7 for a decent pack of weapons seems more or less correct. As a Target exclusive, and having the word Red right in its name, there’s a not-small chance this will be at least initially restricted to Target Redcard holders for purchase. But last year’s exclusives T-Wrecks and Road Rage did eventually become available to anyone who wanted to buy them, so Red Cog probably will as well.

We also go the official announcements of two Buzzworthy subline additions: Terrorsaur, and Dinobot in decos based on their original toys. These two have popped up recently through unofficial means, so they’re not exactly a first look, and they had been indicated from store inventory data as well. 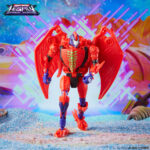 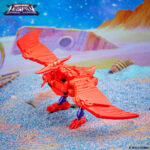 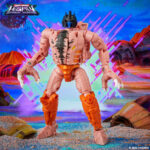 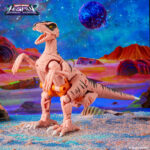 Dinobot in particular made quite a splash when it leaked, for having the distinct appearance of a plucked chicken. Unfortunately the official photos do all of nothing to take away from that impression. The original Dinobot toy was a kind of tan-adjacent skintone kind of color, but it was just off enough to not look like skin the way this does. This modern redo of that seems to have missed the mark a tiny bit in hitting that color, possibly leaning too far toward pink when it maybe needed to go more toward yellow or brown.

Terrorsaur ought to be welcome for some of the people who might not have been able to get the more show-appearance-based release via Amazon before it sold through and started calling for slightly crazy money. If you’re in to toy decos, this robot mode looks pretty good with this color layout adapted to it. But the beast mode seems to lack a little something in a way the original toy didn’t, but I’ve never managed to quite put my finger on the specific problem.

So far as we know, these toys will follow standard pricing. Dinobot is currently listed in Target’s system for around $32, and Terrorsaur will probably be $25. These again do not have a planned release time stated as yet, but samples are known to exist thanks to coverage via questionable means. That strongly points to the production run having happened. In that case, we could see these anywhere from the next few weeks onward depending on various circumstances. Target exclusives have become a little hard to predict, especially after Buzzworthy Silverstreak apparently spent months after arriving in port waiting to get in to distribution.