We had the surprise and probably rather unplanned reveal of two live action movie Studio Series toys this week, when In Demand Toys shared stock photo assets for an upcoming Voyager wave.

Thundercracker is the latest reuse of the Bumblebee Movie Starscream mold, in classic very G1 toy-inspired blues. The wisdom of this release has been questioned after Thrust was generally viewed as a shelfwarmer last year, but maybe something a little more G1-based will have better appeal. To the regret of fatigued fans everywhere hungry for non-G1 homages in their collector lines. 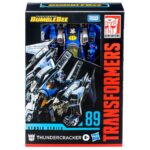 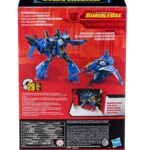 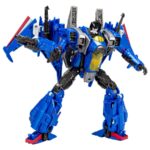 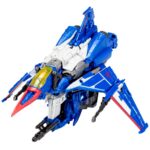 Possibly more interesting is Galvatron from Age of Extinction! Galvatron is always going to be a challenging design to carry out as a toy since the design in the movie never even had the conceit of “real” transformation, being infamous for changing forms by becoming a cloud of metal particles, and the robot mode having little or no indication of the vehicle form evident. The original AOE toy dealt with this by having the truck parts be just a shell that collapsed on the robot’s back in a surprisingly satisfying spring-loaded mechanism while basically all of the robot was non-integral to the truck cab mode.

Studio Series Galvatron looks like it’s trying to go a different way. The robot’s legs obviously show some of the truck body in the structure, and otherwise it looks like for some large chunks that reversing panels with truck or robot detail on opposite sides are being employed. This is probably the best way to achieve the final look both modes need to have, especially within a Voyager parts count and overall budget. The unofficial third party try, Nero from Unique Toys is generally said to have done it best, but that’s with a practically unlimited number of tiny parts, no ceiling on cost, no safety regulations to satisfy, and no regard for that a 45-70 minute transformation session may not be a desirable feature in exchange for extreme accuracy. But we certainly will acknowledge the engineering accomplishment that is making this work as an actually transforming object at all. The official Studio Series toy will likely balance all of these factors in a more generally pleasing way though, and for a price between $30 and $35. 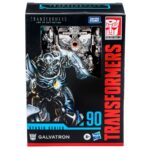 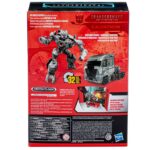 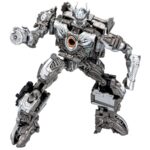 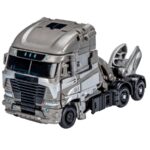 In Demand says they’ll begin taking order for these later this month, which probably means these are meant to be the subject of another Transformers Tuesday in the next couple of weeks. Getting the news out this way isn’t great, but it’s a nice bit of change from samples smuggled out of the factory ending up on some youtube channel as our first exposure to the new toys.