Masterpieces with a lot of easy reuse potential typically get milked in order to support other MPs that can’t be recouped quite as easily. That means the Masterpiece Skids family must be banking a lot for other entries in the line right now, since we’re getting our fourth instance coming up next year!

“Dia Burn Out” is TakaraTomy’s official name for the character that we know simply as Burn Out, based on the black Honda City Turbo Diaclone toy which retroactively gained its Transformers identity through a Botcon 2015 exclusive.

This effectively gets the whole batch of distinct Diaclone decos wrapped up in Masterpiece format. There is a fifth variant of the original Diaclone, but it’s a red City Turbo with negligible deco differences from Reboost and using the non-faceplated head – essentially Red Skids. It’s unlikely that variant will become a Transformer character anytime soon, given its tremendous similarity to Reboost. We understand that Japan absolutely adores this goofy little subcompact car, so it’s not much surprise that as many of these colorways as are practical have been rolled out while the interest is still fresh.

For those of us outside Japan without a cultural connection, there is still a particular appeal for this instance of the figure: It’s the best value of the whole lineup. US-based retailers offering officially-sanctioned preorders are listing Dia Burn Out at just $74.99. That’s in contrast to the first three entries, which did and still do list new for $89.99 each. Dia Burn Out does not skimp on accessories or anything for that reduction either, including a small arsenal of assorted weapons, plus the scooter, and a hologram driver this time using the Carly MP-driver figurine as the base mold, first seen with MP-44. 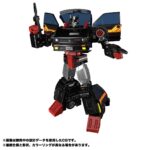 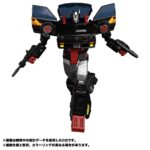 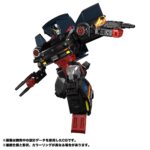 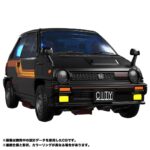 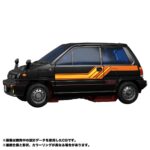 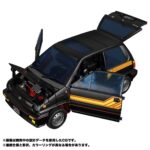 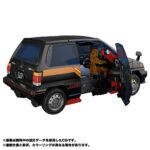 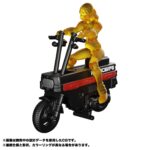 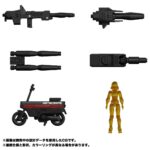 Japanese release for this figure is planned for late March, with international preorders expected to begin being filled in June. As of time of writing, preorders were available via Hasbro Pulse and the usual fan-channel retailers. It’s a ways off, but it seems like if you were only going to get one in instance of this mold, and you were still on the fence about which one, this might be the one to go for. After all, a $75 Masterpiece in this day and age that doesn’t break or take a theoretical physics degree and three days to transform is almost unimaginable!