It really is like 2017 all over again, as now we have a purported leak image that’s been scribbled all over to hide all but the specifically-chosen details. Released via Marco Madrys over instagram and Youtube, the image is claimed to be a first look at next year’s Titan Class offering: The Ark. 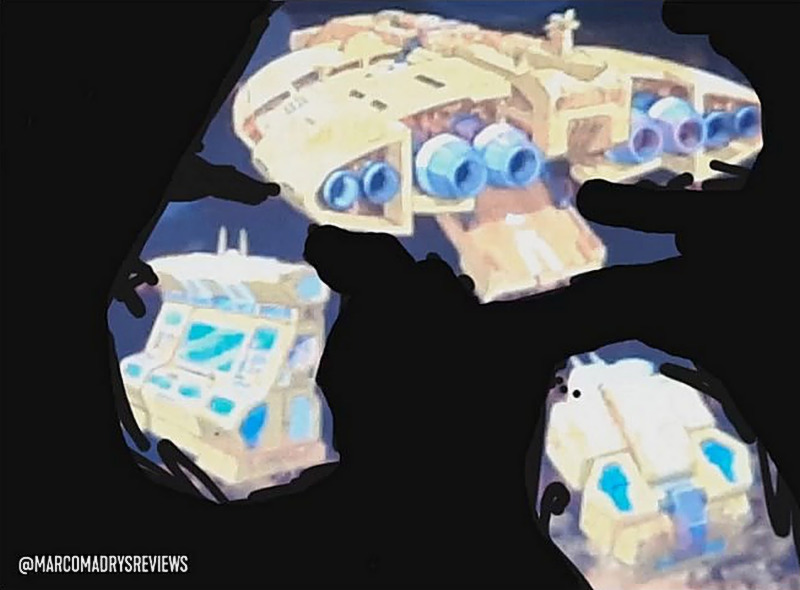 The Ark has been rumored as the Titan by the he-tell-me crowd for a little while already, and that part is generally not being held in question anymore. Whether this image that’s been leaked today genuinely depicts the referenced upcoming toy is however still open for debate. The image is very poor quality; we can imagine that it would have been a photo taken of a screen where the image was being displayed.

What we get to see is an aft view of the Ark itself, a Teletraan-1 console, and a shape that seems to be the Teletraan console transformed as possibly an Autobot shuttle inspired by the one seen in the finale of Beast Wars. It may be a bit obfuscated by the poor image quality, but it seems most likely that these are renders or other stages of art assets for the project, rather than photos of even a painted early prototype. In particular, Teletraan-1’s console looks like it’s had coloring effects applied, most noticeable on the screens. The ship itself also seems to have dark lines visible along some of the corners and edges that resemble cel-shaded CGI or fine-detail, colored lineart. The only element that looks like it might be a physical object is the shuttle-like component.

We have traditionally gotten our first look at a physical piece of the following year’s Titan at NYCC in previous years. Even though that event is not happening as planned, Hasbro PulseCon is taking place in a very close timeframe, during which we expect the official reveal of Kingdom with looks at first wave toys. It’s possible the Titan tease will proceed as it otherwise would have during that event, and using the shuttle that might transform into Teletraan-1 would probably be the best thing they could use as a “hint”.

Less and less of Kingdom seems to remain un-ruined for the fandom. But at least we’ll still probably be surprised by the last Generations Selects reveal on Tuesday…?

Share this ArticleLike this article? Email it to a friend!
Email sent!