The TakaraTomy Mall exclusive set was revealed in the early Monday morning hours, and while some speculation like a reimagined Dinoking was probably well outside the realm of possibility anyway, the answer seems more than a little of an anti-climax.

Generations Selects Volcanicus is a set of the five main Dinobots (sorry, Slash) with decos tweaked slightly to favor the cartoon look of the Dinobots a bit more, but still staying pretty close to the original, individual releases. 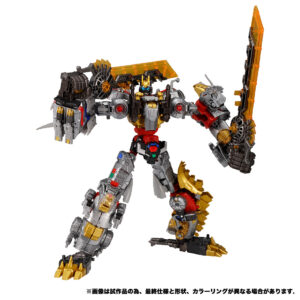 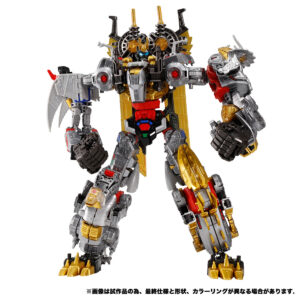 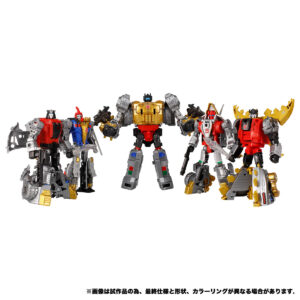 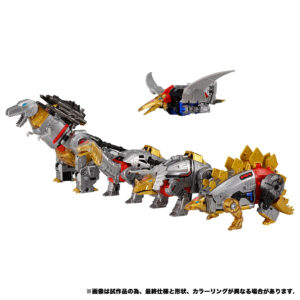 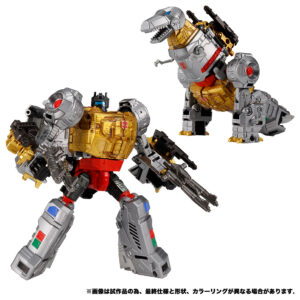 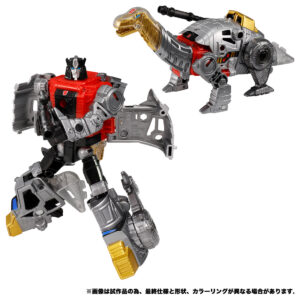 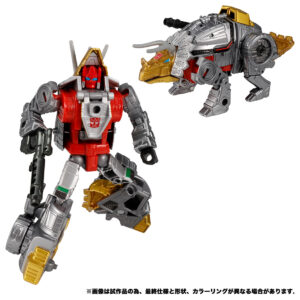 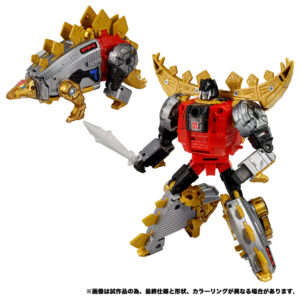 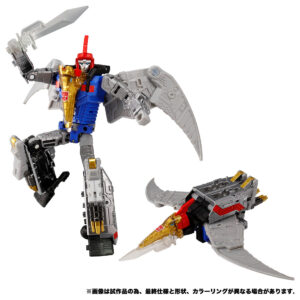 A few extra weapons are included, the focus among them being on the pair of gigantic swords for Volcanicus, which are based on the sword design seen in use by Grimlock in the Fall of Cybertron video game. Grimlock also receives a few added weapons for solo use. The placement of two of them on the combined form has led some to wonder if they might serve a role in stabilizing Grimlock’s torso mode in some way.

But for the new inclusions, what’s most conspicuous is what is absent. In the original releases, only Snarl and Swoop came with swords, and that is unchanged in this set. Likewise, those two toys didn’t come with rifles, which Slag and Sludge had. Not providing the “missing” weapons for the whole group seems odd, and especially leaving Grimlock without his own sword particularly stands out.

TakaraTomy Mall has the set up for preorder until October 6th, listed for ¥22,000. The Volcanicus boxset is planned to be delivered in late February. Hasbro Pulse has not yet listed the set for preorder, and it’s not clear if they will. Being so little different from the original versions, it may not seem worthwhile. If that should be the case, Selects Volcanicus will join Siege Nemesis Prime among the very short list of TakaraTomy special editions Pulse has not made available in the US.

Since we have unintended foreknowledge of G1 Dinobots coming along in Studio Series, this seems to stand as a last chance to squeeze some use out of the Power of The Primes Dinobot molds before they’re made irrelevant, or outright obsolete. Hopefully even though we’ve only had retail inventory listings for two Dinobots in Studio Series so far, this move might serve as a degree of confirmation that the whole team is in the works for a do-over.