Haslab Victory Saber backers received their first update e-mail today for the project. Our first look behind the scenes brings us the process of planning the mold layouts for Star Saber and Victory Leo. Being that we’re still in early stages of the production, right now Hasbro and TakaraTomy’s engineers are doing what is essentially “test fits”, using printed template sheets and a disassembled set of prototypes to figure out which pieces will go where, and how they’ll be grouped. 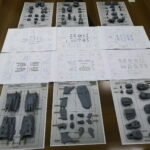 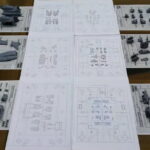 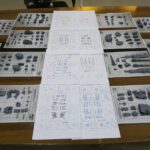 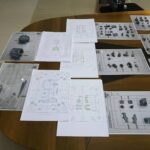 At the time these photos were current, we’re looking at a total of 19 tooling elements, which most likely accounts for the entirety of both figures, and the bonus accessories unlocked during the campaign. Though it should be noted the Micromasters would not be included here, as their molds are already existing components which would be manufactured independently. According to the update, the main purpose of this step is to decide which parts will be in which colors, and what sort of material they’ll be made of. The material matters for what sort of job a given part will be expected to do. There are also colors noted on the papers, but most of them can’t be clearly read in these photos.

In this layout, we can see a proposed 9 molds of ordinary ABS plastic that will make up most of the structure, plus one mold of clear ABS. Typically they’ll try to group as many clear parts in a single tool as possible, and indeed we can see the parts for the display stand and Saber’s cockpit canopy laid down together.

There are 8 molds designated for PA plastic – polyamide, which you might more commonly recognize by the name nylon. This is the “unpaintable plastic” found in virtually every Transformer, to which the industrial paints used in manufacturing will not adhere or cure to, because something something chemistry, probably. Getting these sorted out to the right colors is very important since there’s no way to add or modify their color after production. These parts are the ones that have to endure ongoing stress or mild distortion as a normal part of their job, and often occur in hinges, ball joints, and anything else that needs a bit of give without stressing and cracking.

9+1+8 is only 18, so what’s the 19th and final mold? POM platic. Polyoxymethylene. There’s the least of this, because it has a very specific single job to do. This is the plastic that things like gears are made of, because it’s hard and naturally has low friction. So teeth won’t bend, distort, or break with use, and for many applications, no oils are needed to let geared parts work smoothly together. So any action feature parts, which ought to include the Branmaster functionality, will use this plastic. It would be poorly suited to other applications, for instance larger parts where its rigidity would be detrimental and make pieces more likely to break.

The prototype parts laid out on the sheets doesn’t necessarily depict the intended arrangements in the molds exactly. We can infer that just by a few of the more populated sheets having parts laying outside the outline boxes for different tool sizes. The sheets in the middle of some of the groupings show diagrams of how some of the parts are expected to fit within the milled steel molds once the next step of production goes forward.

From here, Hasbro and TakaraTomy will work with the factory to address any issues that may come up with the proposed mold layouts, which might require a trip back to this stage to redistribute some parts if the professionals at the factory see something that definitely won’t work. There also may be other small intermediate steps before cutting of metal begins. One of the presentation streams specifically mentioned making changes to the sword blade, for instance. If that hasn’t been finished yet, it would of course need to be before any molds are made. But hopefully the next update will be telling us that the next stage of production is well underway!