You are here: Home / RFC News Desk / The 2020 Transformers Hall of Fame Voting

Hasbro is moving forward with the Hall of Fame this year, asking fans to vote on a pair of categories for new inclusions. The more interesting of the two is a vote for which (robot) character from Transformers: Prime should be added to the Hall of Fame. Seems a bit random, until you remember that Transformers: Prime is having its tenth anniversary. It looks like as part of whatever overall observance of that event they have planned, Hasbro wants to give special recognition to one fan chosen character.

Speaking solely for myself, as a fan, it’s obvious the only correct choice for this is Knockout.

Taking this together with the leaked box photos for the Selects-style Prime anniversary maybe-subline-question-mark, Hasbro does seem to be putting some effort in acknowledging the series hitting double-digits this year.

The other selection to be made is for a toy from Earthrise to be inducted. Amusing for this one, the choices include multiple toys that haven’t been released yet, and omit any store exclusives. It also leaves out any Battlemasters and Micromaster teams. I guess Slitherfang just isn’t welcome in the Hall of Fame. Poor HISS Plank. Otherwise, this does seem to cover all of the unique molds seen in Earthrise, so if you want to vote based on toy quality more than character representation, you have a full range of options. 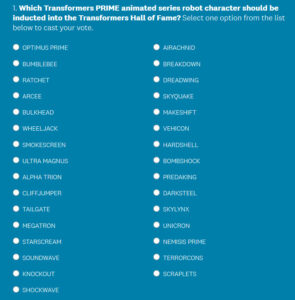 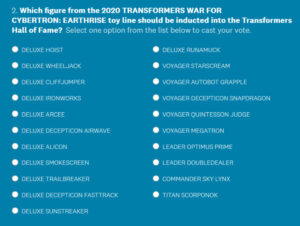 You can cast your votes on the survey page here. We expect the results to be announced during PulseCon, next weekend on the 25th and 26th.

What Color Is Netflix Edition So...
First Look At Kingdom Fossilizer...